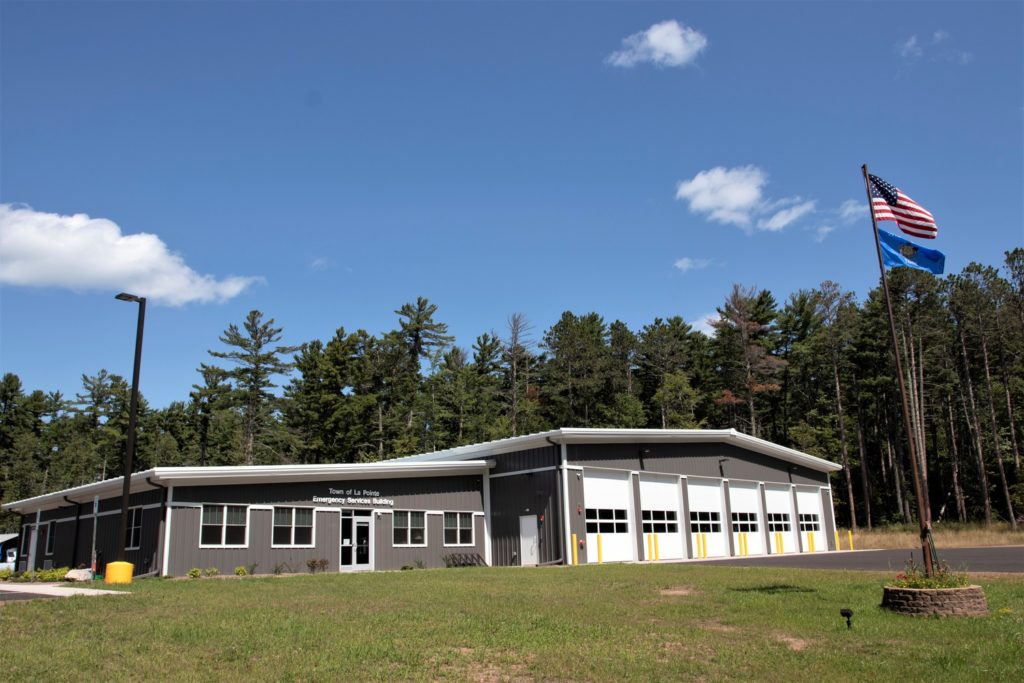 The Town of La Pointe, WI is a small community and vacation destination located on Madeline Island on Lake Superior. Accessible by ferry in the summer, ice road in the winter, and wind sled when neither of those options are available, one can only imagine the logistics of constructing a new multi-million-dollar facility there. In March 2019, a fire destroyed the emergency services facility that serves this great island. The Town of La Pointe lost their facility, equipment, and everything that made the departments who they were. They acted quickly, acquiring personal protective gear, vehicles, and other equipment from various departments throughout the Midwest who were overwhelmingly generous. A makeshift firehall was set up using two nearby buildings to give the volunteer department a temporary home. They then turned their attention to re-building their facility.

Wendel’s Five Bugle’s Design team was chosen to design and build the new station. Using our Master Builder solution, the new station doubled the square footage of the previous building. Being on the island, equipment had to be brought in across the lake making use of the ice road and ferry. During tourist season, careful coordination was important for ferry crossing times to ensure that our operations didn’t impact local businesses. The heaviest piece of equipment to be sent over was a crane weighing in at an impressive 160,000 pounds. Additionally, trucks full of concrete, metal building framing materials, various equipment and personnel had to make the crossing.

It was important to safeguard against future fires at the station, so a new fire suppression system was included in the design. This unique project involved designing a fire station for a small town located on an Island, in Lake Superior, in the state of Wisconsin. The only source of water is a well, and with the fire station being at the top of the hill, the water table was significantly below grade. The limited water supply via well pump was not capable of supplying the demand of a sprinkler system. It was determined that unground tanks would be installed to hold the volume of water required for a sprinkler system discharge. Our team designed a system of two tanks having a total capacity of 30,000 gallons. This system was designed to flow over 400 gallons per minute for a duration of 60 minutes, complying with code requirements in NFPA 13. To prevent freezing, these tanks were buried below the frost line, resulting in the bottom of the tank being nearly 16 feet deep.

These tanks were originally filled by tanker trucks to speed up the fill process. However, the well pump was connected to the tanks to always maintain water levels. A fire pump building was constructed directly above the tanks. Access to the tanks via manhole were located within the building, as well as the fire pump and associated controllers. The fire pump was a vertical turbine pump that draws water from 12 inches above the tank floor to serve the fire station. The fire station was provided with a wet-pipe sprinkler system throughout all areas within the building.

For the Fire and EMS departments, there are individual offices for each organization, an EMS Storage room, SCBA/Workshop area, and mechanical mezzanine. For the Police department, the facility contains two individual dorm rooms, kitchen, day room and shared toilet/shower facilities. Due to ferry schedules ending late in the evening, officers are required to stay overnight on the island. The facility also contains evidence processing and evidence storage areas, and an intoxilyzer for the police department as access to the mainland is limited.

The new facility has shared spaces throughout that include a large training room that will fit 30 people at tables and chairs and is allowed for the community to use. An exercise room for the department, as availability on the island is limited. A decontamination/laundry/toilet area with an extractor, residential laundry, and individual lockers to allow these volunteers to keep a set of clean clothing at the station. Six apparatus bays house the ambulances, police squads and all fire apparatus.

The facility is complete with generator power for emergency situations on the island. Liquid Propane is used to fuel the generator, water heaters and furnaces, as well as the boilers that serve the in-floor radiant heat in the apparatus bays. Although not installed at this time, the facility is planned for vehicle exhaust to be added via available funds in the future.

This efficiently planned facility was designed to keep square footage down and is now home to the Fire, EMS and the Police Departments for the Town. Shared spaces were the key to this design, but it was important to give each entity their own individual space. The project was completed in April 2021, and the Town is now protected by a state-of-the-art facility they are proud of.