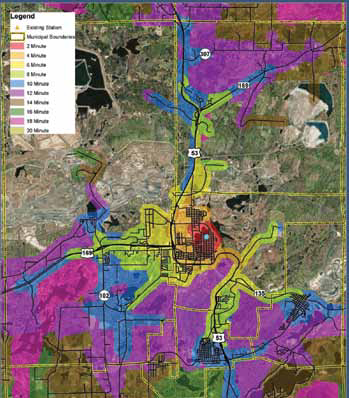 Current Demographics
Our team will review current Municipal and District data, resource information, and mapping. We will consult with staff to obtain available copies of supporting documents including but not limited to:

GIS MAPPING
Acceptable response times within the fire station’s geographic responsibility zone is the most important factor in the final site decision. Our methodology looks at response times and required response times based on population densities, population projections and national standards. This is true for both EMS and fire units.

Using GIS our Team will complete the following:
The land use/zoning of the surrounding townships and determine potential growth areas utilizing the collected data layers.

Response Time and Location GIS Mapping Deliverables
Our Team will utilize the County road centerline layer with all of its attributes (speed limits, etc.), along with the location data for the calls from the department’s files, to create a transportation model for use in ArcInfo 9.2. We will use the ArcInfo network tools then to model the following scenarios for response times:

Scenario 1: Existing response times in intervals of minutes (2-, 3-,4-, 5-, 6-, 7- and 8-minute response capabilities and distance). Analyzing the existing scenario, our GIS staff will analyze the roadway network to determine locations of roadway segments that may assist in improving the response times.

Scenario 3: Our Team will analyze the entire response area and locate a station as though no station currently exists.

Other Factors
Fire station siting is more than just looking at response times. Five Bugles Design has developed a site assessment matrix that comprehensively measures multiple criteria of a site for an emergency services facility. Included in this evaluation are not only typical architectural considerations such as utilities, water/runoff retention, grade issues, and soil conditions but also emergency service components such as travel times, response routes, limitations from railroad tracks, bridges, street width, congested traffic areas, apparatus topographic limitations, apparatus turning radius, and drive through bay consideration. Response times for volunteers to the station is also a major consideration.